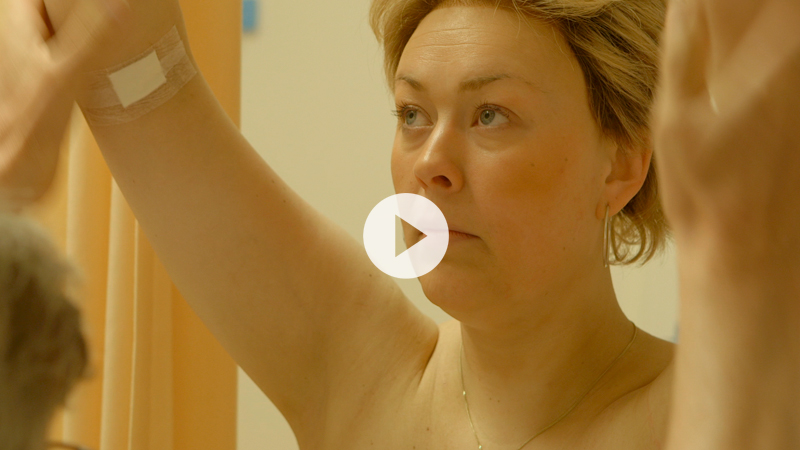 Up close and without comment this film shows how breast cancer throws the lives of three women into turmoil. Sabrina, Vicky and Ingrid fight to uphold their dignity and womanhood despite the pain and sorrow they have to go through. How do they pick up the pieces and who is there to help? How do they and their partners handle the fear of an uncertain future? Hoping against hope, the three women tackle the disease with tenacity and humor in this ode to their zest for life and resilience.

The IDFA jury report:
The winning film tackled a tough subject with a great deal of humanity and tenderness. What could have been a grim journey was made uplifting and inspirational, partly through the skill of the filmmakers and partly because of the unquenchable courage displayed by the characters in the film. This was a brave piece of work, made with patience and respect for its subjects, and even though it was sometimes highly emotional it was also leavened with humour. In short, it is one of those rare films that can make an audience laugh and cry.

‘A balanced, moving, and most of all very intimate documentary, without even a hint of voyeurism.’
– De Volkskrant

”Awake in a bad dream” also erects a monument for the doctors and nurses who bring down the cliché of the patient to be a number. The film is a wonderful example of the Dutch human and social documentary tradition. No thrills, but empathy and involvement.’
– Het Parool

“Awake in a bad dream” is a co-production with HUMAN television made with the support of CoBO Fonds, Dutch Cultural Media Fund, Netherlands Film Fund, MOKUM Film distribution and Stichting Abraham Tuschinski Fonds.